ALTHOUGH the statistics here include only data analyses of the citizens of Georgia and excludes foreign migrants who work and/or live in Georgia. The nationalities such as Turkish and Chinese represent considerable number there. Different attitudes and policies apply to this issue, so it might be a topic of the other post.

Georgia is an independent state in the Black Sea region. It borders to Armenia, Azerbaijan, Russia and Turkey. It is distinguished for unique location, rich cultural heritage and ethnic diversity – about 120 ethnic groups inhabit its territory.

Here is a map of ethnic composition of Georgia and their settlement areas (source: European Center for Minority Issues, Tbilisi Regional Office). 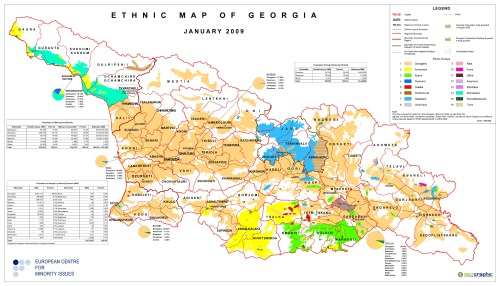 Ethnic minorities live both in capital city (Tbilisi) and regions, mainly at the borderlines. Ethnic Azeries inhabit territories near the border of Azerbaijan (Marneuli district), ethnic Armenianis – at the border of Armenia (Akhakalaki district). Mostly they have monoethnic compact settlements in the regions; although in some cases they appear integrated in a larger community (Mainly in Tbilisi and other urban areas with more miscellaneous ethnic composition). The largest minority groups – Armenians and Azeries have schools, newspapers, theater into their native language. But knowledge of state language (Georgian) is a real problem among them. In the Soviet era they used to communicate into Russian with peers of different ethnic origins. Though, when Georgia gained independence and Russian lost its dominant position as a language of interaction, integration of the minorities in the society became more difficult.

“Totally, on all 4 channels about 70 topics was counted during 30 days (90% of that was in the News) that concerned with the questions of Azery and Armenian ethnical minorities, living in Georgia, or Armenia and Azerbaijan. Most of them concerned with two neighborhood countries as International News and not with the questions of ethnical minorities in Georgia (but during the research this information was marked as important for the target group). And if we add to this the fact that the most information concerning with regions densely populated with Armenians and Azeries, were affairs about border or crime, and if we exclude the same information broadcasted by various channels, we will see that on the leading Georgian TV channels interest and attention to the problems of Armenian and Azery population are extremely minimal.”

More detailed analysis, data and criteria you can find in the full version of the report here:

Informal relations are different according to regions. In the urban areas ethnic minorities are more integrated in the society, that’s why interethnic relations are more settled and constructive. Friendships, even marriages are very common there. But in the regions, where a certain ethnic group has a separated settlement, and do not know Georgian, communication is complicated. There negative stereotypes can’t be beaten and they can lead to different aggressive actions.

As I indicated in my previous post, the main problem for ethnic minorities in Georgia is a language barrier. Most of them do not speak Georgian – the state language. That’s why they can’t communicate with other citizens, can’t understand information from main TV or radio channels. Thus they are becoming vulnerable group for hostile propaganda.

Language barrier causes other problem – inaccessible education. Ethnic minorities mostly get primary and secondary education on their mother tongues. Their knowledge of Georgian is so basic that they can’t pass exams in the universities. In order to get desired education, they migrate in other countries – Azerbaijan, Armenia and Russia. Due to this reason, they can’t get jobs in Georgia and unemployment level among ethnic minorities is high. Hard social-economic conditions also promote development of aggression and separatist ideas.

Due to these circumstances, ethnic minorities can’t realize their political rights. Among them you can find people who even do not know how to vote, or even how to express own political platform. Ethnic minorities are excluded from political participation – they have very small representation in the state agencies. Only few of them can be found on the level of local self-government; even fewer – on the higher political positions, in the government or parliament. I think that it’s one of the reasons why ethnic minorities can’t realize their rights. They can’t lobby own interests.

Ethnic minority problems have different resolutions, depending on the decision-making institution. Governmental policy aims to work out large-scale approaches so that they could satisfy needs of all minorities.

The author discusses competences and activities of these agencies. It becomes evident that due to permanent reshuffles in the government, mixed competences and poor coordination significant results were not achieved.

Full version of the paper: ECMI_Institutions in Georgia for Governance of National Minorities

As we can see, Government of Georgia tries to establish large-scale policy mechanisms in order to provide development of ethnic minorities. Non-governmental sector has more specific target audience. They focus on a very certain geographic area, or age/social group. For example, International Society for Fair elections and democracy (ISFED) develops meetings, round tables in ethnic minority regions, in order to enhance their awareness about electoral process and voting procedure.

In 2007-2008 Youth Association for Social Sciences made researches and projects on the problems of ethnic minority youth. Inclusive round tables were held in Marneuli, Bolnisi, Akhalkalaki, Phkvenisi (Shida Kartli – South Ossetia), with active participation of the local youth. They discussed existing problems and policies. International training of the same organization “Strengthening of contacts in Europe for protection of ethnic minorities’ rights” aimed to identify common problems and their solutions in 10 countries (Armenia, Azerbaijan, Belarus, Estonia, Turkey, Lithuania, Latvia, Moldova, Greece, Georgia, Ukraine.).

This is incomplete list of organizations and activities, which aim to promote personal and civil development of ethnic minorities in Georgia. There are even more actors with wider-range programs. Ethnic minority youth seems to be willing to learn state language – Georgian and actively participate in the social and political life of the country. Considering all the above-mentioned developments, it can be inferred that interethnic relations are trended to positive progress.

Questions to the reader: Do you have any experience regarding ethnic minorities? What would be your advice for positive changes? Do you think that programs and activities like these really matter and can bring desired results?

2 responses to “Ethnic Minorities in Georgia: Problems and Resolutions”